During an exercise or war game there will often occur a key decision point when it becomes necessary or more time efficient to break out some of the participants into a separate smaller group, often called a “breakout group.”

This small group can be very effective in obtaining a comprehensive view of a problem, situation, or likely solution that include a variety of viewpoints. Additionally, there may be times when multiple small groups are formed to address various questions or issues. In the case of multiple small groups, various approaches can be applied during the breakout session. 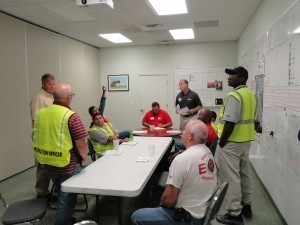 e approach is for each breakout group to be charged with discussing and answering a specific key question or issue that will aid in the formation of an action plan related to the goals and objectives of the exercise. A second approach is to charge each breakout group with addressing the same issue and then bring them back together where each group reports and discusses their respective findings. While it is true that much in each of the breakout group’s report will be similar, it is our experience that there will also be some significant differences and the joint discussions following each group’s brief out adds to the richness of the exercise.

An added benefit of using breakout group(s) during an exercise is that attendees are more actively involved and likely to retain more information once the event is over. It also offers the opportunity for many of the quieter participants, who may feel intimidated by a larger group, to become more actively involved in the exercise.